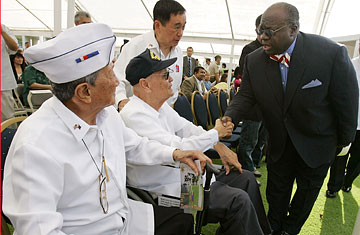 As the Filipino and American flags were raised side by side at the annual Memorial Day celebration at Manila’s American Cemetery, World War II veterans like Ernesto Lopez stood extra proud. At the age of 83, he could finally stop fighting.

For more than 60 years, Filipino World War II veterans have been lobbying to receive benefits promised to them by the U.S. government during the war. But it was only with the signing of the American Recovery and Reinvestment Act in 2009 — decades after many of them fought battles in places such as Bataan and Corregidor — that Filipino veterans were formally recognized for fighting alongside the U.S. armed forces, and were slated to receive financial compensation for their sacrifice.

(Watch a video about WW II vets in Washington.)

When World War II started, the Philippines was a U.S. commonwealth, and Filipino soldiers became incorporated into the American military command. Some 250,000 Filipinos fought for America during the war, and over half of them died in service. After the U.S. military surrendered to Japan in the archipelago in 1942, thousands of Filipinos fought in a guerilla campaign against their occupiers until General MacArthur and his troops landed in Leyte, an island in the nation’s south, in October 1944. The two forces fought together until Japan was defeated, and the Philippines became liberated.

For Lopez, who joined those guerilla forces when he was 14 and helped ferry food and supplies to fighters hiding in the mountains, the long-awaited American compensation was an important milestone. “We need money, but what is important to us is the recognition,” says Lopez, who has yet to receive his payment. “Although we meet Americans who acknowledge our service, it is the recognition by the American government that we have waited for.”

During the war, U.S. President Franklin D. Roosevelt announced that Filipinos who fought against the enemy would be given the same veterans’ benefits as American soldiers, but when President Truman signed the 1946 Rescission Act, that promise was taken away for the majority of those who fought in the war. Though Washington gave no official explanation at the time, the Philippines’ Undersecretary of Veteran Affairs Ernesto Carolina believes the U.S. could not afford to pay so many Filipino veterans in the postwar years. “There were so many fighting that they would have had to pay at least $6 billion at that time,” says Carolina. “After the war, the U.S. needed money for reconstruction efforts.”

Since then, compensation has only been paid to veterans who were injured or for those who were killed during the war. The rest of the more than 250,000 who volunteered to fight have received nothing, leaving many, like Herminia de la Cruz, 86, feeling “downhearted.” De la Cruz was just 17 when she started sewing letters to her clothes in order to sneak orders from Filipino guerilla officers in Manila to their comrades conducting “hit and run” operations from the countryside. “I used to have great belief that Americans treated people equally no matter their colors. Now I believe differently,” says de la Cruz. “We fought the same war, but the American soldiers were treated better than their Filipino counterparts.” She says receiving benefits earlier could have changed the course of her life dramatically: “I could have been much more independent in my old age.”

The Filipino Veterans Equity Compensation (FVEC) provision of last year’s U.S. stimulus bill earmarked $198 million to be distributed to the estimated 18,000 Filipino veterans who are still alive. Those with American citizenship will receive a lump sum $15,000; non-U.S. citizens will receive $9,000. With the average age of these veterans at 83, the U.S. Department of Veterans Affairs in Manila has worked hard to distribute these funds quickly. In just over one year, $186 million has been paid out to about 15,000 veterans and payments to 11,000 are currently being processed. (Families of deceased veterans are not eligible to apply.)

Although some veterans are happy to put this chapter of their lives to rest, many are receiving these tardy benefits with mixed feelings. Air force General Felix Pescana was part of a liaison group that delivered messages between the U.S. Army Forces in the Far East (USAFFE) headquarters and lower units of the division. He then survived the brutal Bataan death march, in which the Japanese military forcibly marched 75,000 Americans and Filipino POWs 37 miles. Some 18,000 died along the way. Although Pescana says he is grateful for his $9,000 payment, which he says he has used for medicine, the 90-year-old is still angry about what he sees as discrimination in the law. “What does citizenship have to do with personal needs?” he asks. “Why would a veteran in my stage who is an American citizen receive more than I should? … How can you tell me how much my service is worth?”

Still, the bill has been a step toward healing. Army General Ernesto Mata, now 94, say that its passage makes him feel appreciated, and any hurt feelings have been forgotten now that their sacrifices are being recognized. “We still respect the Americans, whom we fought with as brothers,” he says. And though Pescana feels “rotten” about the decades “we were forgotten about,” he says he could not help feeling better when the long-awaited compensation finally came through. “At least Uncle Sam remembered us,” he says. “It’s better than nothing.”

Co-produced & co-directed this award-winning documentary about one woman’s journey through a century of love, war and discovery.

Curiosity, Adventure & Love is a the story of a woman raised by fate to go boldly where few young women of her time and upbringing would go… into the arms of chance and life.

A young American woman leaves her country and all security behind, to begin an adventure in
the Philippines that would witness the birth of a nation, a cruel war and Occupation and
reconstruction.

Jessie, is a striking personality, somewhere between Scarlett O’Hara and Amelia Earhart, who knew no boundaries and flew far ahead of her times, without regard to sex or society.

Her story of a century well-lived is both rich and one that should restore our faith
in our own humanity.

"Discover the colors of the Philippines", Travel Blog

"VIRGIN OF THE ROCK"

I went stand up paddling as is my habit, but this time I found 40 pesos ($1) floating in the sea. I watched it float a little but then decided to pick it up. After a few moments, I decided it was a gift from the sea to the Virgin of the rock- this is what I have nicknamed the statue of the Virgin Mary that sits in the middle of a makeshift shrine on Willys rock near the shore of Boracay's White Beach. She sits in this giant rock formation, (which looks like a giant turtle) guarded by one young coconut tree, and only accessible at low tide.

I paddled over and tied my board to the makeshift banister, walked up the rock-stairs and after a few seconds of reflection, placed the 40 pesos between her praying hands…

I only visit her when the sea or beach provides a gift and today it did! Sometimes its’ a shell or a piece of coral or a small rock or in one case a hermit crab ( I thought perhaps she needed a friend so I introduced them) but today it was cash..

The Virgin gets lots of visitors so I figured maybe someone would come along who needed hope or the sign of seeing money or perhaps the money itself -- so I decided I would leave it just in case..

A “New York City made me smile moment”…