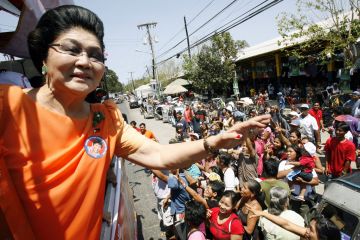 MANILA, Philippines — It’s been 26 years since Dictator Ferdinand Marcos was overthrown, but in many ways his family never left town.

Drive down the street in the former president’s home province of Ilocos Norte, about 250 miles north of Manila, and colorful campaign posters broadcast the Marcos name.

Despite the allegations of corruption and extreme human rights abuses during the 20 years of Marcos’ reign, his family has had an unquestioned hold over local politics in Ilocos since they returned from exile in 1991. Veteran local politicians have frequently stepped aside to ensure victory for a Marcos on the ballot.

Marcos political support stems from a fierce loyalty people have in this remote region for the late dictator, and now, with elections May 10, the Marcoses could move even further center stage. Former first lady Imelda and daughter Imee are running for the local positions in congress and as governor. Marcos’ only son, Ferdinand Jr., currently a congressman, is campaigning for a nationally elected senate seat.

Known for her 3,000 pairs of shoes and her lavish, jet-setting lifestyle, Imelda became a symbol of extravagance during her husband’s reign. According to the former first lady, all the years in the public eye have taught her a lesson that will help her serve.

“Democracy is not a leveling ideology. God does not make us all the same. Democracy is maximizing the potential of every human being to his wholeness, fulfillment, dignity,” she said in a recent interview at her apartment in Makati, dressed in an aqua and black caftan with the same coiffed hairdo as always.

Known for her 3,000 pairs of shoes, Imelda became a symbol of extravagance during her husband’s reign. (Sunshine de Leon/GlobalPost)

These are sweeping words, but it was a pointed political play that ultimately drew Imelda back into the political fray. At 80 years old, Imelda says the thought of a comeback was far from her mind, but a slight to her family name forced her to take a stand. The Marcos family had promised Senator Manny Villar — a presidential candidate of the same party as Ferdinand Jr. — voter support in Ilocos. When the current Ilocos governor was said to have questioned that support, Imelda took it as a personal affront.

“It’s not fair for those you promise to be supported and then suddenly your flock is not there with you,” she said, adding that she ran in order to “ensure that political integrity and truth will prevail.”

People in other areas of the Philippines may remember the dark shadows of the Marcos years, but “Ilocanos,” or those who share the same language of this northernmost part of the country, still speak of him as a hero.

Ilocos businessman and Marcos loyalist Toby Bassi said he believes in Marcos’ integrity. “No amount of vilification could negate the fact that he did a lot for the poor. So the masses are just returning the favor,” he said. “Ilocanos are very clannish. Once you have gained their respect, they go through all the pains to really protect you and be supportive.”

Congressman Mariano Nelupta Jr., a former Marcos ally who is now running against Imelda, said Ilocanos were only exposed to the good side of the Marcos regime. “People may not be aware of what happened in Manila. … Here in Ilocos Norte nothing happened,” he said. “Most of my life I was a fanatic to the Marcoses. I didn’t believe the rumors — only recently have I seen proof and started to believe.”

Political scientist Alex Magno, of the University of the Philippines, explains the Marcos family’s hold on the region. “It’s out of love,” he said. “When [Marcos] was president he was a generous patron for the Ilocos region. The region had full employment. Their infrastructure is among the best in the country. So the Marcos myth persists there.”

Some voters rationalize their support by saying that things aren’t comparatively better today. “Compared to the current administration, he was really not that bad. And he did a lot of wonderful things. … People remember this and it balances out,” said Ilocos business owner Sammy Blass.

Manila-based Dodie Santos took part in the Edsa People Power movement that forced Marcos out of power, but said a lack of economic progress since that time has softened his views. “During Marcos, our economy was so good but unfortunately look at us today. Even Vietnamis overtaking us,” he said.

Paulynn Paredes Sican, a journalist, said nostalgia for the stability of the Marcos era is misguided. “These people just look at the bigger picture — that martial law seemed a quieter more stable time. They don’t bother to know about the methods he used to get what he wanted.”

Sican said she would never support a Marcos. “The [Marcos] children are writing their own revisionist history. … They have never apologized. Until they admit that their father could have been wrong, its hard to accept them as leaders,” she said.

Given the clan-like nature of Filipino politics and the fact that Imelda and Imee are running in traditional Marcos territory, a certain level of local support can be expected. But Ferdinand Jr. is receiving enough support around the country to put him in the lead for a national senate seat.

Sican said she thinks that in a senate race with 62 candidates, name recall counts for a lot. “No matter how bad you are, if people recall your name, they don’t really care,” she said, adding that, on the other hand, for young voters the name doesn’t have the same powerful associations.

“About half of the voting population is very young and were not around during martial law. They don’t have the passion against it and our education system has not taught them well,” she said.

Though Imelda herself is not Ilocano, her supporters don’t think that will hurt her too much. Her decision to run against a long-time Marcos ally, though, might. Imee is campaigning against a cousin, as well. In a region that prides itself on its unity, voters will now have to choose sides.

Political scientist Magno said that Imelda and Imee decided to run without consulting other politicians, which may have offended some. “This could translate into Ilocanos voting against them for the very first time,” he said.

Imelda played an active role during her husband’s presidency — as mayor, member of parliament and representing the president on diplomatic missions abroad. Given that their accomplishments were discredited when democracy was restored, many question her motives now. Some say Imelda wants to avoid prosecution for past crimes. Others maintain that redemption is really what she’s after.

But Imelda would have the Filipino people decide. “That decision will belong to the Filipino people,” she said. “Let it not be said that I did not offer to serve and to love. It does not matter actually If I win or not. The important thing is I have the courage to say that I am ready to give. If it is rejected that will not stop me from serving.”

Co-produced & co-directed this award-winning documentary about one woman’s journey through a century of love, war and discovery.

Curiosity, Adventure & Love is a the story of a woman raised by fate to go boldly where few young women of her time and upbringing would go… into the arms of chance and life.

A young American woman leaves her country and all security behind, to begin an adventure in
the Philippines that would witness the birth of a nation, a cruel war and Occupation and
reconstruction.

Jessie, is a striking personality, somewhere between Scarlett O’Hara and Amelia Earhart, who knew no boundaries and flew far ahead of her times, without regard to sex or society.

Her story of a century well-lived is both rich and one that should restore our faith
in our own humanity.

"Discover the colors of the Philippines", Travel Blog

"VIRGIN OF THE ROCK"

I went stand up paddling as is my habit, but this time I found 40 pesos ($1) floating in the sea. I watched it float a little but then decided to pick it up. After a few moments, I decided it was a gift from the sea to the Virgin of the rock- this is what I have nicknamed the statue of the Virgin Mary that sits in the middle of a makeshift shrine on Willys rock near the shore of Boracay's White Beach. She sits in this giant rock formation, (which looks like a giant turtle) guarded by one young coconut tree, and only accessible at low tide.

I paddled over and tied my board to the makeshift banister, walked up the rock-stairs and after a few seconds of reflection, placed the 40 pesos between her praying hands…

I only visit her when the sea or beach provides a gift and today it did! Sometimes its’ a shell or a piece of coral or a small rock or in one case a hermit crab ( I thought perhaps she needed a friend so I introduced them) but today it was cash..

The Virgin gets lots of visitors so I figured maybe someone would come along who needed hope or the sign of seeing money or perhaps the money itself -- so I decided I would leave it just in case..

A “New York City made me smile moment”…